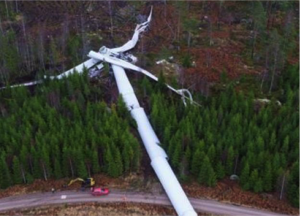 If anybody ever doubted that verifying the correct residual load in each and every bolt is key critical in industrial bolting applications, read on.

On December 24th 2015 a three-year-old wind turbine collapsed across a road at the Lemnhult wind farm in Sweden. The road was only for access and nobody was injured or killed but the image shows the devastation and provokes a sobering thought about what may have happened were the turbine in another location.

Swedish officials have pointed to incorrect bolt installation as the root cause of the collapse and Government accident investigation authority SHK said there were clear signs of fatigue and corrosion at the join between the bottom and second section of the tower.

“The bolts that had held together the joint had suffered from a fatigue process and the bolts could no longer withstand the loads of normal operation. The flange surfaces in the main wind direction showed signs of corrosion which most likely originated from the bolts.”

SHK said the cause of the fatigue was “the pre-tension force in the joint was too low”. It said the reason for not achieving the required standard “was due to the bolts, tower sections and tools not being protected from rain and snow during installation”. SHK added that the tools were not maintained properly and that the assembler who performed final torqueing of the bolts “had no previous experience” and “had not received the manufacturer’s internal training”.

Last year a turbine suffered a similar bolt failure at a wind farm in Hawaii, albeit at the top of the tower. Incorrect tensioning was again the main suspect.

So, be it torque or tension, verification that the bolts are tightened correctly is critical. Even with inexperienced operators, were the Torq-Comm Commander system in use in either of these cases, the bolt tightness would be guaranteed and the catastrophic failures completely avoided.